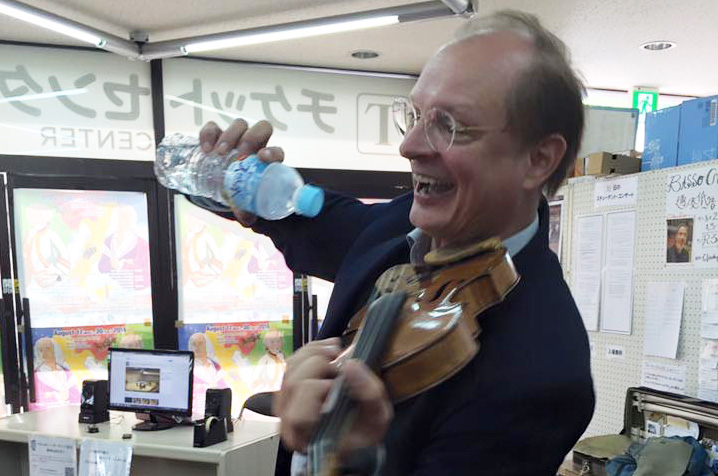 We asked our professors to answer some questions for the festival last year from Prof. Markus Wolf, who is a Concertmester at Bavarian State Opera (Bayerische Staatsoper).

Academy: What is your opinion about the benefit of attending the masterclass in Kusatsu as a student?
Prof. Wolf: Masterclasses in Kusatsu are a unique combination of lessons and concerts in a wonderful countryside, in which the participating students can improve and enjoy.The exceptional European Professors offer the long European musical tradition.New impulses and impressions will be delivered.

Academy:  What attracts you to join the festival as a teacher and an artist?
Prof. Wolf: First of all I love Japan, particularly the breathtaking countryside of Kusatsu (twin town of Neustift in Tirol, where I spend my holidays every year!).Because the students are eager and hardworking I am highly motivated to work with them.Further, the concerts with my colleagues are always very special for me, because the exchange of musical ideas can be not only instructive but also often confirmation of own opinions.

Academy: Is there any Mozart piece(s) which has a special meaning or memory for you?
(part1)
Prof. Wolf: I had my first fundamental experience with music of W.A.Mozart at the age of 15, when I played his Requiem for the first time, conducted by my father. My father was a highly acknowledged musician in Vienna, and a leader of an excellent church choir. I played the piece at least fifty times with him conducting.
At the same time I received the record of Mozart’s great g-minor Sinfonie conducted by Wilhelm Furtwängler. At my highschool it was a recording with legendary character. It passt almost no day, that we did not listen to this great music! Eventhough times have changed in regards of style and taste, I think this interpretation is to this day unsurpassed regarding the energetic and musical shape.
As a violin-playing teenager I was happy and proud, that Mozart chose for the thrilling emotion in his e-minor Sonata the Pianoforte and the Violin. This jewel has in all the years not lost any of its fascination to me, on the contrary, I am admiring this masterpiece with growing age more and more, as it achives with the most simple tools a maximum of expressions.
At the age of 19 I became a member of the Vienna Chamber Orchestra. Up to this point I knew foremost Mozart’s chamber music, his violin concertos, some of his symphonies and his church music. The piano concertos, which Mozart played himself and basically composed for himself, I only got to know and to appreciate now. Unforgettable remains my first experience of accompanying the d-minor piano concerto.

(part2)
Prof. Wolf: At the age of 24 I received the honorable invitation of the Alban-Berg-Quartet (the Primarius Günter Pichler was my teacher) to perform and record the string quintets in C-major and g-minor as a violist. (I played the viola since I was thirteen and received lessons with Hatto Beyerle. At times I was a better violist than a violinist..) The intensive studies of these gorgeous works with one of the world best ensembles filled me with deep respect and impression. I experienced the most intensive coaching with lasting effects on my future musical development.
As a student I did not used to go to the opera. This “bad” habit changed immediately, when I, at the age of 26, won the position of First Concertmaster at the Bavarian State Opera. Instantly I had to learn the operas by Mozart. What a new world! Now I realized, that to a certain extent, all works by Mozart are operas. Some of my memorable experiences were my first performances of “Figaro” and “Don Giovanni” conducted by Wolfgang Sawallisch, who played also the recitative on the harpsichord..!
When my father died on Dec.14th 2008 I was supposed to perform Mozart’s Sinfonia Concertante the following day in Munich at the Academic Concert series. Considering the circumstances this was a rather difficult task for me. Zubin Mehta, the conductor of the performance, granted loving support to me – we both dedicated the performance of the second movement (c-minor) to my father.